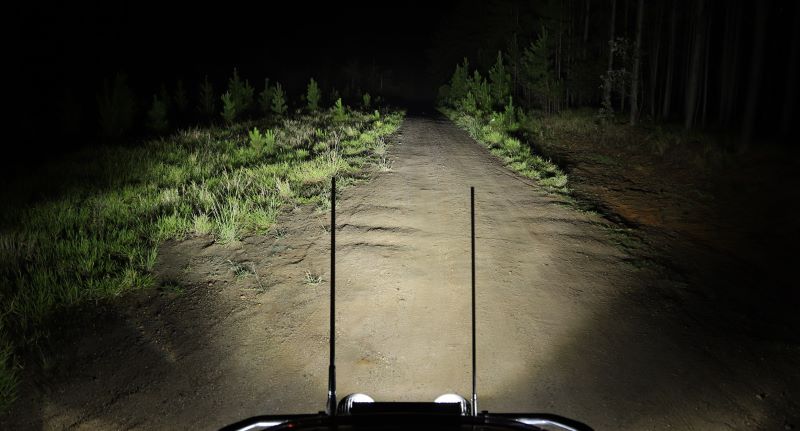 We often get asked how the Lightforce DL230 HTX HID / LED compares to the Livid HyperDrive Mk2.

Without sounding bias, it was difficult to relay to customers an accurate and truthful depiction of what each lamp provides.

It would be safe to assume we’re biased against our own product, and there is truth in that. We are very proud of what we have designed and manufactured and do believe the HyperDrive Mk2 to be an amazing offering. However, bringing a biased opinion to a comparison would eradicate all integrity we have built with you over the years, which is the last thing we wish to do!

We invite you to look through this comparison we’ve built between some of the industry’s best offerings. We wouldn’t typically build a comparison like this, however, we feel it’s one of the most honest available.

Our take on the Lightforce HTX

Rather impressive. Both HID and LED colour temperature match well together, resulting in a pleasant experience on the eyes. The HID component showed impressive beam distance, although the alignment of lamps played a>VERYimportant role in getting it right. Vehicles that constantly vary in load and weight would struggle to keep alignment, however, this challenge is present with all HID pencil lamps, not just the HTX. HID warm-up time was fairly prompt at around 11 seconds until full warm up.

The HTX LED component was interesting. We were impressed to see the width and usefulness of the beam in the near field, however, the prospect of using only LED for driving lights would be bitterly disappointing. With both LED and HID excited, the combination was rather impressive. We did find there was a void between the HID/LED beam patterns meeting which left a dark area where light is needed most at highway speed. We have no doubts about the beam distance capability of 1768m, however, we struggled to be able to use that in a tangible sense. We found, although there was a lot of light down the road, there was little light where we needed it most.

Mounting of the HTX is adequate. We found it a little flimsy for the height and the weight of the lamp but didn’t feel as though the light would fall off per se. The wiring harness was an extra $120, which is more than fair. Wiring the HTX in could be a painful task, however, Lightforce has done a great job at making the process reliable and easy. The harness is large and seemingly cumbersome but to the trained or handy, it makes sense and works really well.

The HTX struggled with the smoothness and consistency of the combination of both HID and LED beams together, where the HyperDrive Mk2 excelled with a much smoother beam pattern thus making for a more usable lamp. The HID component of the HTX we found, outshone the Livid HyperDrive Mk2 – however, the usable area of light wasmuchless. In other words, if aligned correctly and the circumstances were perfectly ideal, the HTX would shine further than the Livid Mk2.

The LED component of the HTX offered more width of light than the Mk2 HyperDrive but struggled to make a useful contribution to the night drive ahead without the being complimented by the HTX’s HID offering. We found the Mk2 offered less width of the beam, but at speeds above 70-80kph, offered much more forgiving and usable light down the road ahead. Naturally, HID takes seemingly ages to warm up which is difficult to accept when you’ve been spoiled by LED technology and the instant boom of light associated with it.

During the busier periods of traffic on highways, there was almost no point turning the HID element on as it just simply took to long to warm up before you would have to dip your lights for oncoming traffic again. We found there was just an adequate amount of light projection from the LED element of the HTX, finding the HyperDrive Mk2 a lot more usable for general use.

Both Livid HyperDrive Mk2 and Lightforce HTX are built well, there isn’t any question of that. Unfortunately, the HTX (or any HID lamp) will naturally be more susceptible to failure or wear and tear as HID lasts significantly less than LED – however, this is nothing to do with Lightforce or their engineering, just a trait of HID technology. The HTX has provision for top mounted stability brackets, which suggest the lower foot mounting system may not be able to hold the lamp to the steadiness required to keep the HID beam straight and reduce wobble. We didn’t experience any major issues regarding this in the 1950km+ we did over a day and full night during testing.

The HyperDrive’s stay rock solid, even on multiple unavoidable animal strikes we encountered. The HyperDrive’s are equipped with an industrial standard mounting system. They are cradled in a 5mm one piece Stainless Steel bracket,ALL fasteners used with the entire Livid range are all high tensile. We have integrated helicoils/threaded inserts in the cast housing, instead of tapping the cast housing which will inevitably fail from fatigue and vibration. Helicoils ensure you can reach a far greater level of tightness without stripping the thread, ever. The HyperDrive is also balanced within the bracket to ensure that there is no greater point of weight on top or below the bracket to lamp mounting points, thus significantly reducing vibration load points and harmonic ‘lamp wobble’.

Optical Lenses are optical components designed to focus or diverge light. TIR’s consist of a refractive lens nestled inside a reflector and are typically cone-shaped with optical efficiencies as high as 93%.

LED reflectors sit over the LED to alter the beam of light. They are an affordable and easy-to-use solution for your lighting fitment. However, they do not offer as much control as LED lenses.

We found the Lightforce HTX to be a little scattered and offered little clarity to the beam. Whilst the HID beamed down the road, the LED seemed lost and optically misguided. We received a great deal of feedback from road signs and even cat-eyes on the road. Most led lamps that use reflectors will suffer from ‘light bleed’ or ‘stray light’ which essentially means that light is escaping the reflector without redirection – not ideal. However, this phenomenon is displayed through all reflector based LED driving lights and not just the HTX.

The Mk2 HyperDrive features 8 full sized 50mm optics which capture all the light from the source and direct through design, not default. The optics have been tooled specifically to work in conjunction with the CREE XM-L and XM-L2 diodes, extracting their full potential. The benefit to optics over reflectors was really clear when testing and driving with both lamps. Although both produce light, the HyperDrive was noticeably clearer and offered an easier experience in long-haul situations.

To read more about Optics Vs Reflectors, click here.

It’s a misconception that more power or wattage is better or going to provide more light. It’s also a misconception that your vehicles electrical system can tolerate it. Good news, both lamps don’t really draw all that much current/amps in comparison to their performance. The HyperDrive’s clamped in at 7.2amp each (14.4 amp pair) and the HTX clamped in at 10.9amps each (21.8amps pair with HID and LED on) at 13.7 volts. The HyperDrive is renowned for being incredibly efficient and considered low electrical stress on even the most modest vehicle electrical systems. Personally, I don’t believe the HTX is all that inefficient either – there is certainly worse out there!

Generally speaking, when considering a purchase of a high end set of Driving Lights, price doesn’t really come into play. However, we will still go through the motions. The Lightforce HTX is one of the most expensive driving lights on the market, due to the complexity of the light we assume. Paying more doesn’t necessarily mean that the light will suit you better, it comes down to a value point and what makes the most sense for you. The reason Lightforce has a 12v and 24v option is due to the voltage parameters of the ballast required for HID.

It’s safe to say, both lamps covered with an honourable warranty. Lightforce offers a 3-year warranty on their range and Livid offer a lifetime warranty across their range. Lightforce and Livid have been around long enough to for customers to feel as though any support or warranty claim will be honoured with pride and professionalism. Our lifetime warranty is something unique to us and it’s a perk of owning our product that we don’t take lightly. We cover pretty much everything, as long as misconduct or misuse hasn’t been exercised. This being said, Lightforce also has a reputable name in the industry for support, which is a credit to them. Keep in mind, the life expectancy is relatively short for HID technology, at only 250-300 hours in this application, however, components can be replaced at a cost.

We found the HTX very impressive and have no doubts about its beam distance ability. Build quality was fairly reasonable and durable. We concluded both HTX and HyperDrive Mk2 are very different in their nature, both having unique benefits. It’s very true and accurate to say, both lamps are impressive.