Solid-state lighting or LED has great potential to offer unparalleled performance if accompanied by the right lenses and reflectors.

Optical Lenses are optical components designed to focus or diverge light. TIR’s consist of a refractive lens nestled inside a reflector and are typically cone-shaped with optical efficiencies as high as 93%.

LED reflectors sit over the LED to alter the beam of light. They are an affordable and easy-to-use solution for your lighting fitment. However, they do not offer as much control as LED lenses.

What is an ‘optic’ and why do I need them?

LEDs have smaller form factors than their conventional counterparts, but they differ in how they emit light. Incandescent illuminate in 360 degrees but LEDs are directional, illuminating only 180 degrees. With this theory in mind, we need to approach lighting physics in a completely different way and thus use different methods to extracting the most from our luminaire.

Designed around the phenomenon where light travelling from one medium to another of lesser optical density hits the interface at an angle and reflects with 100% of the beam energy, TIR optics, or TIR lenses, consist of a refractive lens nestled inside a reflector and are typically cone-shaped with optical efficiencies as high as 92%. The lens directs light from the source’s centre to the reflector, which sends it out in a controlled beam. An additional surface over the assembly provides another opportunity to modify the light.

TIR optics are able to utilize the characteristics that are unique to LED. Unlike incandescents, which radiate heat outward, LEDs send heat out their base, allowing TIR optics to fit tightly over the top. TIR optics have proved prevalent in the outdoor and heavy duty space, but haven’t gained traction in forward projection applications. Optics have an amazing ability to extract and control all of the light produced by solid state lighting.

Reflectors work well when the light source is omnidirectional, however, they prove not overly effective when coupled with a directional light source. Most of the light produced from solid state lighting passes through the system, without really touching the reflector. This reduces the scope of modulation of the beam of light and can cause glare. TIR’s, however, help guide virtually every ray of light emitted by the LED.

The earliest design of automotive headlights was simply a globe and reflector. This created all sorts of problems with glare for on-coming road users. Lens optics technology was developed to help focus the light from the parabolic reflector into a pattern that illuminated the road without blinding on-coming traffic. The first headlight to use optics in the lens appeared in around 1917 – fast forward 90 years and some lighting companies are still using this same old technology. Disadvantages with lens optics are a 10% loss in light output through the lens, some light is refracted and splayed through the lens making the pattern less accurate, and if the lens is broken in transit it renders the light useless as the pattern is lost. 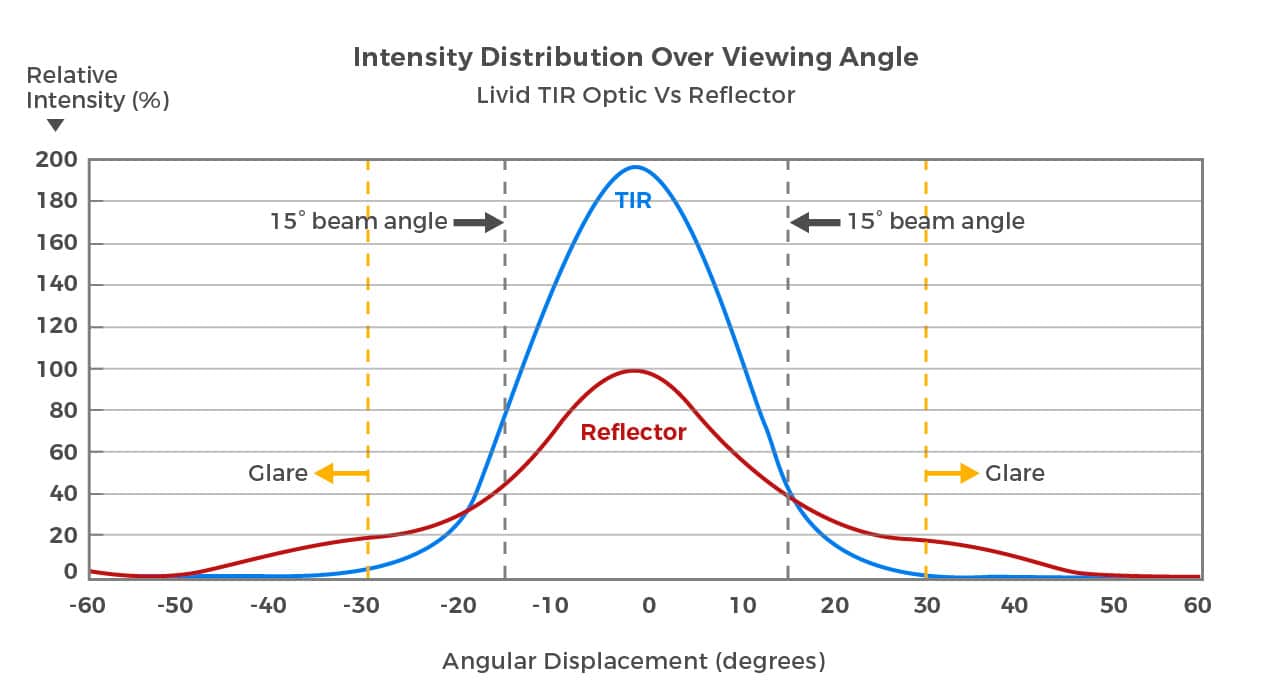