Over a kilometre out of only 160 watts total? This is how you build lights!

I’m not gonna lie to you, being a photojournalist with Unsealed 4X4 is a pretty good gig. I get to travel lots, do big kilometres at night, see some awesome places, and get to test some pretty cool toys. So it was a fairly standard day when I had a set of Livid Lighting Hyperdrive Mk2s thrown at me with a ‘chuck them on your truck for six months and let us know what you think’. The answer? Read on my friends.

On paper, you’d be forgiven for thinking the same way I did when you see that they’re 160W lights. Not each. That’s for the pair. Only 80W each, you say? Yep, true story. And yet, they will make 1 lux out at 1,007 metres. Lux not really your thing and you prefer we talk in lumens? How does 7,495 effective lumens PER LIGHT sound? And cue the stunned silence.

I too looked at the specs online before attaching them to Ol’ Blue. And I was rather gobsmacked. To draw that much light out of eight 10W LEDs isn’t exactly heard of. Manufacturers seem to just want to stick more and more LEDs to the front of a lump of alloy and call them done, or just stick 500W Halogen globes in 14-inch searchlights to the fronts of
our vehicles.

Once you get to have a proper look at these puppies… is where it boggles the mind. Instead of the typical 40 LEDs glued to a reflector board, each LED has its own housing, and projector – which is where the light engineering comes into play. I won’t pretend to know how it’s done, but I’ll be damned if they’re not the brightest spotties I’ve ever seen for the wattage class they’re in.

Something also worth noting: The lux, lumen and wattage ratings were tested here in Australia. They’re not just arbitrary numbers thought up by a little Chinese fellow at the factory in China. They’re real numbers.

Something else that you’ll not see every day: The lights are covered by a lifetime warranty. Yep, lifetime. Really.

In a word? Incredible. They throw a massive amount of light for 160W units, and it all comes down to the design and engineering behind the Hyperdrive Mk2s. Instead of just throwing a heap of LEDs on a lump of alloy, the Hyperdrives have been engineered into the lights in a way that utilises the light output of the eight LEDs to its full potential.

Translate that to how they go when you’re using them? They throw light, straight, without having any light blow out to the sides (or get lost crisscrossing its way down the range).

The light is a very nice 6,000-Kelvin temp, so it’s great on the eyes while doing long trips after dusk. Cheaper lights I’ve had on Ol’ Blue over the years have been all over the shop… and you can end up with really tired eyes after only an hour or two in the saddle. I recently did a run down to Newcastle from Bundaberg – a solid 12-hour run overnight – and they were fantastic. They didn’t move, wobble, or change light colour when they heated up. They were consistent and just did their job.

At the end of the day, cheap lights are something I just won’t waste money on. Despite the absolute lack of quality, and any actual engineering going into them, you’ve got to remember they’re built by the lowest bidder. And being halfway across the Simmo you really don’t want a light deciding it’s had enough and biting the big one.

I’d absolutely recommend these lights to anyone who plans on doing any serious kilometres at night. If you’ve got a dodgy old play truck that you use for the odd night run once or twice a year, and you’ve got more money invested in the stereo than you do in proper wheeling accessories, these may not be for you.

If (on the other hand) you’ve got a properly built tourer, and you plan on going places and seeing the country, I’d have these on the front of your bus without a second thought. Plus, with the lifetime warranty, if anything should go wrong (and after seeing how these are built you’d be hard pressed to imagine that), you’re covered.

The Hyperdrive Mk2s also have this thing called ‘LightSYNC’. The short version is that every light is tested to perform to stringent testing parameters. So you can add extra Hyperdrives (or the smaller Explorers) and you’re going to have exactly the same temperature and exactly the same throw. You’ll never need to worry about two different sets of lights throwing massively different light patterns or temps.

Not the cheapest, but most certainly not the most expensive. You’re looking at $595 per light or $1,190 a pair. Call them mid-high range lights. If nothing else, the warranty makes them worth the money. Oh… also that they run on nearly half the wattage, and do better in distance and light volume than the high-end competitors.

Very little light out the side of the vehicle (but they’re designed not to do that, so I’m clutching at straws) 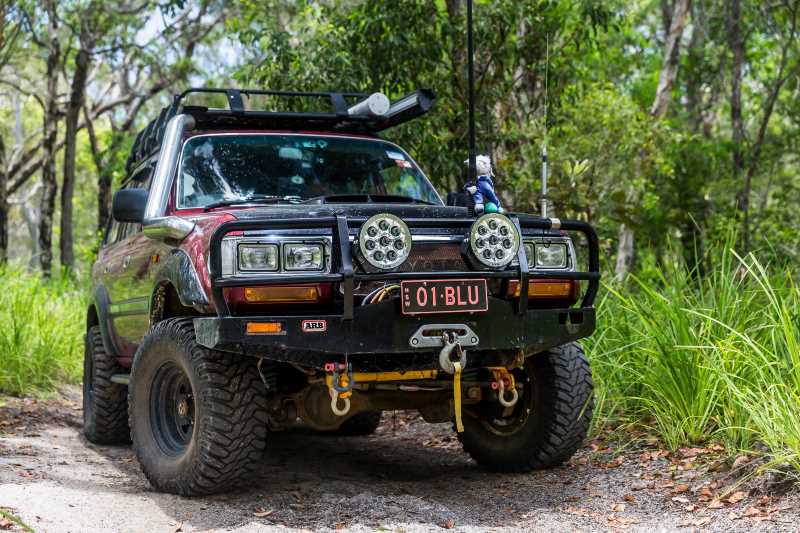